Experience of a Productivity Club Member

Productivity Club Member, Alan Fowler, talks about his experience of participating in the Club’s meetings.

“I have attended all of the SCDI’s Productivity Club‘s meetings since they started in October.  They are free to all comers and happen for half a day once a month in both Glasgow and Edinburgh.

It’s been a very useful experience for me.  Within two short months I have already been able to listen to 12 companies’ experiences and know-how through the Club meetings. What have I learned?

2.  I already knew that Scotland has a big productivity challenge.  I have learned that it ranks 16th amongst 31 member countries in the OECD, well below where its size and resources suggest it should be and very far behind smaller and less well-resourced countries such as Luxembourg, Denmark and Finland. I understand that’s why, amongst many other things, the Scottish Government has funded SCDI to start up these free Clubs for Scottish businesses to swap ideas for productivity.

3.  The biggest theme that has arisen at the meetings has been that people are much more productive (i.e. get more and better results with the same time and effort) when they feel valued in their jobs, know where the company is going, enjoy the company’s culture and feel cared about.  Given that people have always been my organisations’ biggest cost, it’s valuable to learn that investing in achieving those things also gives the best returns in terms of productivity.

Maybe that’s a pretty obvious lesson, but the Club’s meetings have also shown me a lot of practical ideas about just how a variety of companies have turned around the productivity of their people.  These sessions are exchanging real life implementations, not just theory and hot air, and I find that particularly valuable.

4.  Another lesson has come from listening to companies that have challenged all their paperwork and replaced it with available apps, systems and other technology.  It’s freed up their peoples’ time, so that is something I shall always want my companies to do in future.  I’ve also learned the need to take measures against the distraction of effort from productivity that can arise from mistimed use of mobile emailing, texting and messaging.

5.  Not surprisingly, the presenters’ and members’ stories have also confirmed that companies have been getting productivity gains by using technology to capitalise on data that they already collect but had not considered for use.  It’s made me stop and consider what I may be missing out on.

I am sure there is a lot more to come.  For example, one company told the story of how they have turned round their productivity by radically changing their service and market.  It’s exciting to think about whether we can do that too.  There will surely be more examples of that, and of others who will talk about how changing products, production plant, offices, recruitment, marketing or channels will have radically improved their results.  I don’t intend to miss out on being at these sessions!

In my view, the Productivity Clubs are just at the beginning of a big change in Scottish business towards a culture where good ideas spread fast.  It’s not an opportunity to be missed.”

The 5 essential elements that create a positive productivity climate 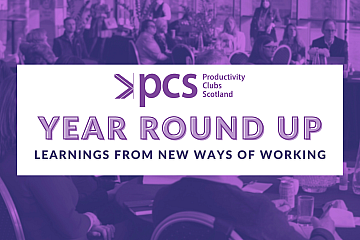 Year Round Up: Learnings from New Ways of Working 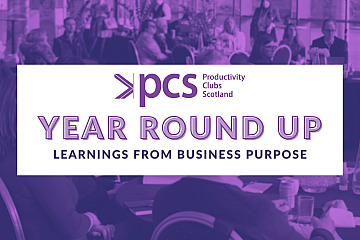 Year Round Up: Learnings from Business Purpose